Nobia, a Swedish kitchen manufacturer operating in the Nordics, UK, Austria, and the Netherlands, is investing in a new kitchen factory in Jönköping, Sweden. The factory will be one of Europe's most modern kitchen manufacturing operations. The factory planning was conducted with a groundbreaking factory simulation implemented by Technology Service company Etteplan. With the digital twin, Nobia could gain significant savings in time and money and acquire a powerful tool for running the factory efficiently. 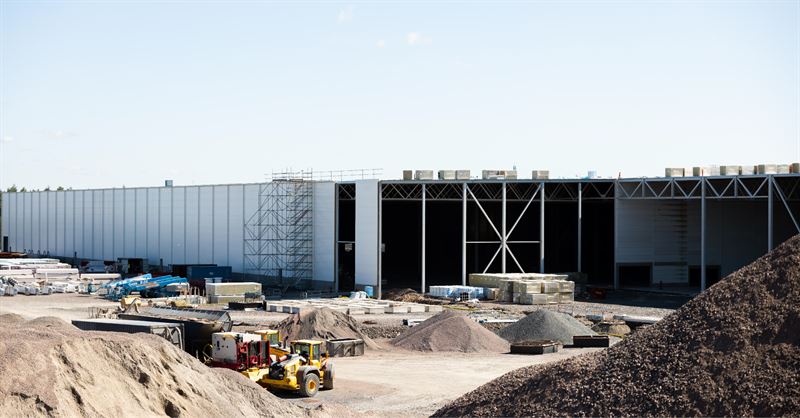 Photo: Nobia’s new kitchen factory in Jönköping will become the most modern in Europe.

Nobia and Etteplan's cooperation in developing the digital twin, a virtual simulation model of the factory, began in late 2020, in the middle of a global pandemic. The new factory is estimated to be ready in 2024. It will be one of the most significant investments in the south of Sweden, with a total investment of around 350 million euros. For a project of this size, good planning was of utmost importance.

"Kitchens are complex systems. For us, mass customization is not only a buzzword: we want to serve both the serial production and the smaller custom brands. By utilizing the latest available technology, the new factory will have a high degree of automation, efficiency and industry-leading sustainability performance. Lead times will be significantly shorter, flexibility will increase, supporting high volume made‐to‐order kitchen production," says Eric Liljegren, project manager in Nobia.

Creating a virtual simulation model capable of imitating the use and behavior of the actual 120 000 sqm factory was an extensive project. Multiple work streams depended on each other.

"The digital twin was able to simulate the operations of the new factory, and it became an essential tool for us to monitor and further optimize the setup in the factory. In the end, we are convinced that our operational equipment efficiency (OEE) is significantly higher, thanks to this groundwork," says Nobia's Liljegren.

During the planning phase, the simulation tool supported the cooperation but also helped with negotiations with Nobia's suppliers. The simulation helped in securing efficiency and savings, too. For example, running the planned operations in digital form revealed that the factory could work as efficiently with fewer manufacturing machines worth millions of euros as with the initially planned number.

"We interviewed all the project managers from saw machine operations to edge banding and shipping. We met with them daily. With this tight communication approach, we could create a digital twin representation of the new factory layout and its functionality. In the end, we had hundreds of parameters influencing the production flow and its OEE," says Etteplan's Johan Nilsson, Area Manager of Software and Embedded Solutions in Sweden.

"This project proved the benefits of working closely together and with maximum transparency. Etteplan understood our needs, and the chosen agile methods were the only way to achieve results in this schedule. The simulation model has become a valuable everyday tool to our production managers," says Eric Liljegren.

The simulation tool was up and running in one year, and the new factory building is well on its way. The digital twin was used to verify choices, challenge suppliers, and ensure that bottlenecks and potential issues were detected early to avoid problems later and, in the end, improve OEE.

The digital twin offers a real opportunity to increase operational equipment efficiency in any production facility.

"Etteplan has a long track record in helping old factories raise efficiency by digitalization and new factories to build modern production lines. This cooperation is a good example of what can be achieved through tight partnership and combined skills," Etteplan's Johan Ehrnrooth, Vice President, Smart Factory.

Nobia develops and sells kitchen solutions through a number of strong brands in Europe, including Magnet in the UK; HTH, Norema, Sigdal, Invita, Superfront and Marbodal in Scandinavia; Petra and A la Carte in Finland; ewe, Intuo and FM in Austria as well as Bribus in the Netherlands. Nobia generates profitability by combining economies of scale with attractive kitchen offerings. The Group has approximately 6,000 employees and net sales of about SEK 14 billion. The share is listed on Nasdaq Stockholm under the ticker NOBI.

We are a rapidly growing technology service company specializing in software and embedded solutions, engineering solutions, and technical documentation solutions. We are a forerunner in the engineering industry and we differentiate ourselves by the wide-ranging competence of our experts. Our customers include world’s leading companies in the manufacturing industry. We help them to create a better world through engineering, innovation and digitalization.

Etteplan has lead the way in the engineering field already since 1983. In 2021, we had a turnover of EUR 300.1 million. The company currently has over 4,000 professionals in Finland, Sweden, the Netherlands, Germany, Poland, Denmark and China. Etteplan's shares are listed on Nasdaq Helsinki Ltd under the ETTE ticker. www.etteplan.com